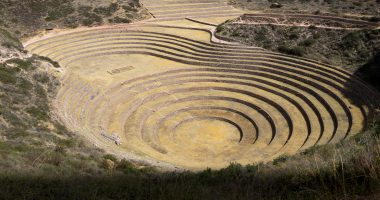 Maras and Moray Tour
10 hours
The Inca people were expert and highly sophisticated in agriculture and hydraulics. To this day, majestic works are preserved that served as laboratories (in the case of Moray) and to sustain salt in the case of Maras. See the greatness of the Incas.
Trip Itinerary

Guided visit to the non-traditional MORAY circuit, a unique archaeological group of its kind. These are depressions or gigantic natural holes in the surface of the land that were used to build terraces or agricultural platforms with their respective irrigation channels. What is striking is the difference in mean annual temperature between the top and bottom of the depressions, which reaches up to 15 ° C in the main depression about 30 meters deep.
MORAY, due to its climatic conditions and other characteristics, was an important center for domestication, acclimatization and hybridization of wild plant species that were modified or adapted for human consumption.

Then we will go to the Salineras located 7 km from Moray, we will pass through a Typical Spanish Town called Maras. Towards the northwest of the town of Maras are the famous salt mines known by some as “salt mines”. They are made up of about 3000 small wells with an average area of ​​about 5 m², built on one side of the slope of the “Qaqawiñay mountain”, Which during the dry season are filled or“ watered ”every 3 days with salty water that emanates from a natural spring located in the upper part of the wells so that when the water evaporates, the salt contained in it gradually solidifies. This process will continue for approximately a month until obtaining a considerable volume of solid salt, about 10 cm. high from the ground, which is subsequently beaten and thus grainy; the salt will then be bagged in plastic bags and sent to the markets of the region; Today that salt is being iodized so its consumption is not harmful.

Return to the City of Cusco
Overnight Hotel.

We use cookies on our website to give you the most relevant experience by remembering your preferences and repeat visits. By clicking “Accept”, you consent to the use of ALL the cookies.
Cookie settingsACCEPT
Manage consent

This website uses cookies to improve your experience while you navigate through the website. Out of these, the cookies that are categorized as necessary are stored on your browser as they are essential for the working of basic functionalities of the website. We also use third-party cookies that help us analyze and understand how you use this website. These cookies will be stored in your browser only with your consent. You also have the option to opt-out of these cookies. But opting out of some of these cookies may affect your browsing experience.
Necessary Always Enabled
Necessary cookies are absolutely essential for the website to function properly. These cookies ensure basic functionalities and security features of the website, anonymously.
Functional
Functional cookies help to perform certain functionalities like sharing the content of the website on social media platforms, collect feedbacks, and other third-party features.
Performance
Performance cookies are used to understand and analyze the key performance indexes of the website which helps in delivering a better user experience for the visitors.
Analytics
Analytical cookies are used to understand how visitors interact with the website. These cookies help provide information on metrics the number of visitors, bounce rate, traffic source, etc.
Advertisement
Advertisement cookies are used to provide visitors with relevant ads and marketing campaigns. These cookies track visitors across websites and collect information to provide customized ads.
Others
Other uncategorized cookies are those that are being analyzed and have not been classified into a category as yet.
SAVE & ACCEPT